Update: Nearly £600 was raised through the auction of my portrait and the sale of prints of it. My thanks to Sean, his staff and Darren Bentley at Burnley Football Club, Alan of B&D Printers, and to the auction winners for helping to provide a charity with much-needed funds (please read below for further details). 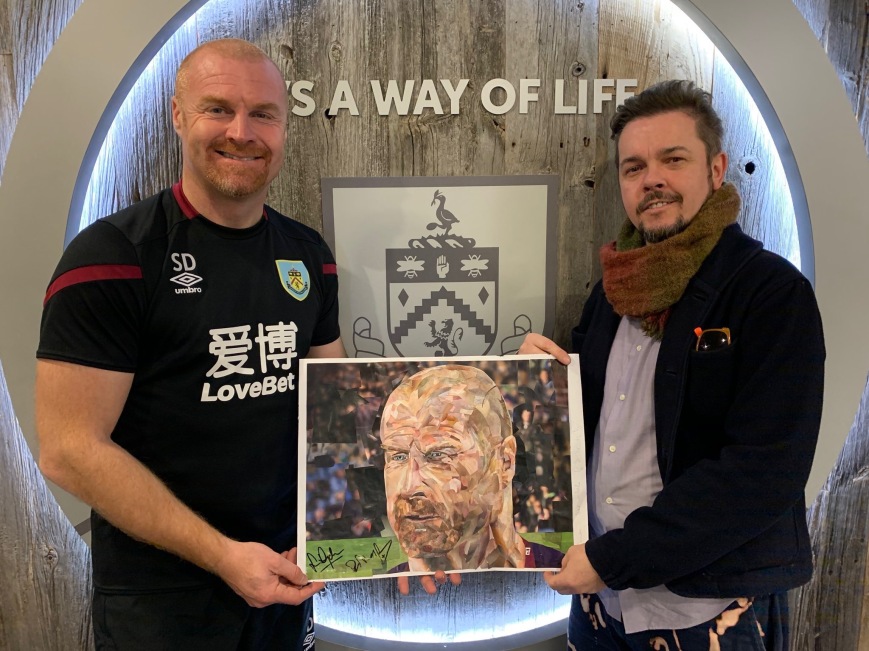 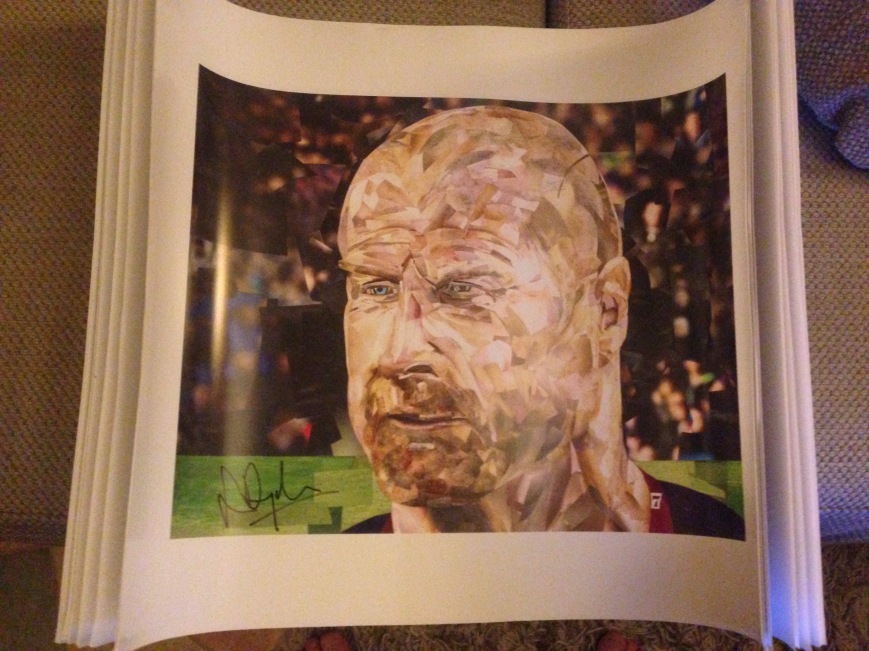 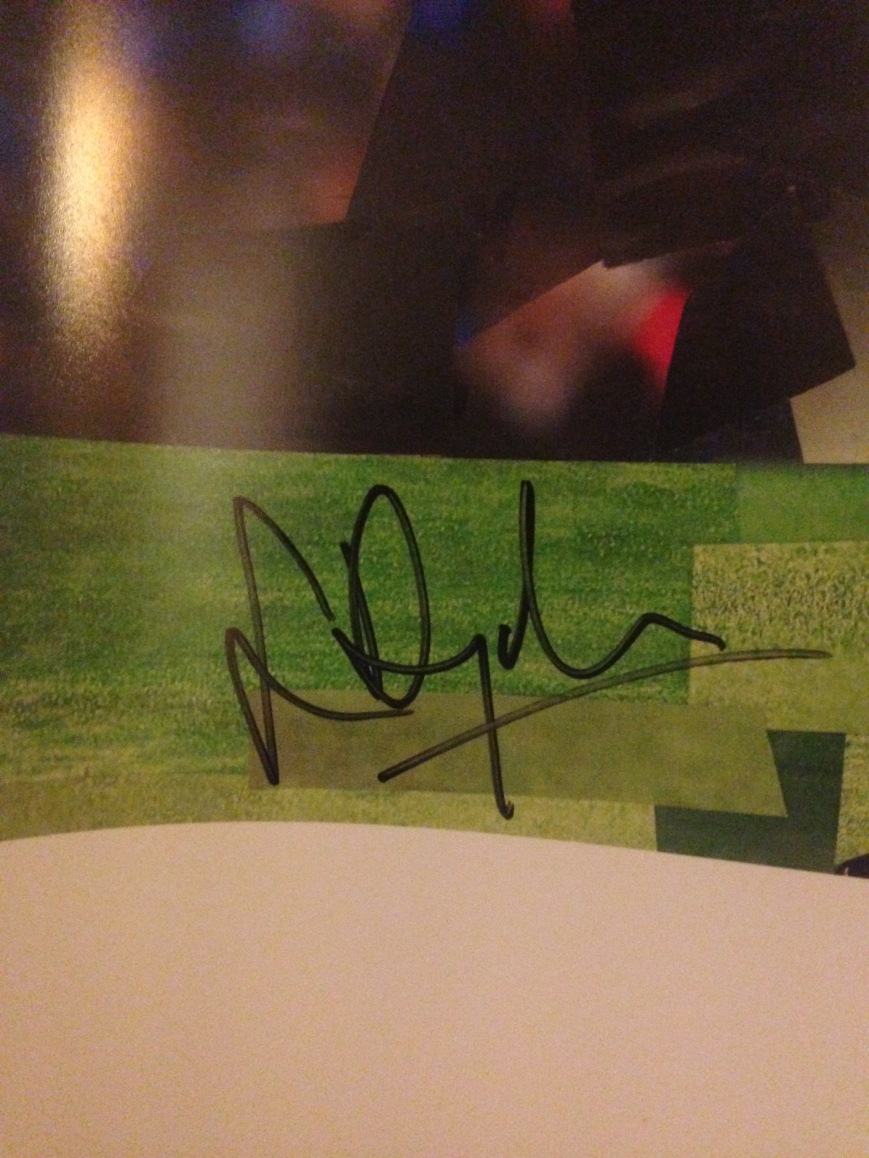 I’m a self-taught artist who likes to create portraits. I also like to try new ways of working to see what happens. As a Burnley FC fan, I have these sat in a corner… 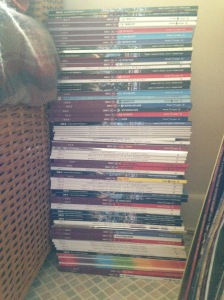 … part of the pile of match programmes from the Championship and Premiership games which I’ve attended. They are full of memories of great games, players and moments, but otherwise the programmes are usually ignored. So I looked through them and picked out some issues which had suitable images inside… 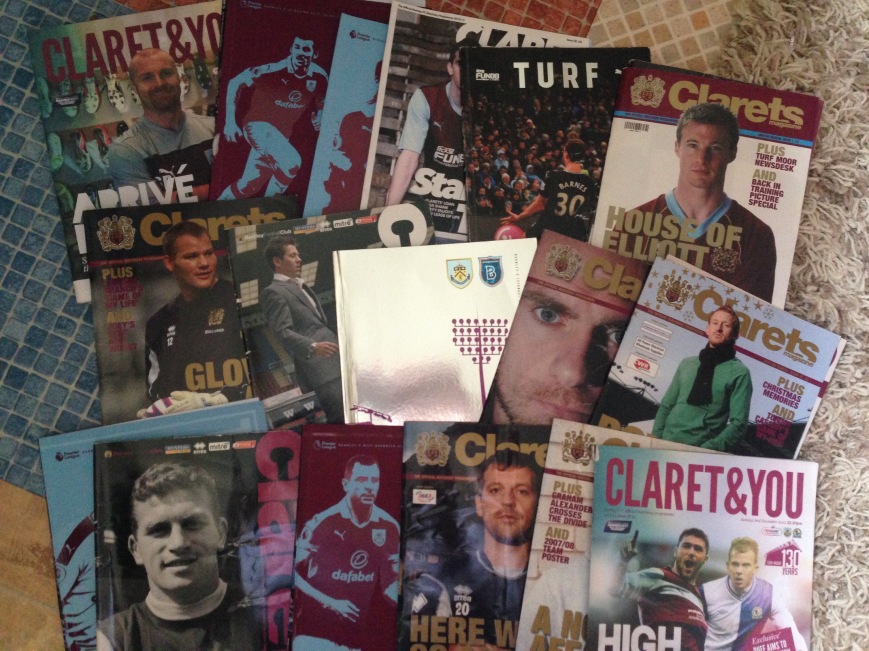 …converting them into this… 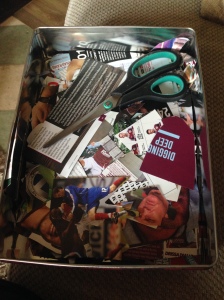 …and then I found a pair of scissors and a pot of PVA and sat down to make these:

This was the first of these portraits to be started and finished. I chose Clarke for a few reasons. The photo used as the original starting point was in a club programme which had CC on the cover. Inside was a close-up shot of his head and shoulders and there seemed to be a lot going on behind those eyes.

Clarke always gave his all in both the Championship and the Premiership. If he ever slacked off during a match, it wasn’t apparent and it would have been out of character.

Guaranteed to be articulate and informed – and enjoyably biased when commentating on the Clarets for Radio Lancashire – his media work showcased the man’s talents off the pitch. Without wanting to dwell on his well-documented personal issues, this portrait is a salute of sorts to a great survivor and a good man.

After Clarke’s portrait was underway, I decided to try another one and quickly chose a player I’d always enjoyed watching as you never knew quite what he’d try and do.

Yes, his goal against Man United is almost enough to make every Burnley fan love him for ever, but Robbie Blake’s twists and turns, distribution and shots whilst low to the ground were a delight (especially as there often weren’t many other great footballing moments to enjoy at the Turf at that time). There was more than a bit of magic about his work hence his ‘little magician’ nickname. A grafter, a battler and a ball player.

Of the three portraits completed, Robbie’s is probably the one where I’ve taken liberties and tried to be a little abstract, perhaps? From an overhead shot of the Turf, I’ve included bits of the old folks’ bungalows nearby. I’m not trying to make any statement about RB by doing it, it just felt right at the time.

There will be another eight portraits of some of my favourite Burnley players to come but having completed two of them, I decided to have a crack at a real challenge: the manager, Sean Dyche.

He’s been in the hot seat for seven years and worked wonders every season. He’s also drily funny in his press conferences and I like how he shows his age and talks about going to gigs and clubs such as the Haçienda. I thought I’d be a right fancy dan and give the portrait a title like a proper artist would: ‘The Seven-Year Hitch’.

This is a slideshow video of the process involved used to make this portrait. Over thirty days, I spent about five hours on average in each session, piecing together my ‘version’ of SD. I tried to take one picture per session and there are about 25 photos here. It’s a bit like creating and completing a jigsaw at the same time.

Anyway, I hope you like what I’ve done and will continue to do.

I’ve donated the original SD portrait to an auction via Burnley FC’s official site soon. The winning bidder will be invited to meet Sean for lunch at the club’s training complex, Barnfield, and be able to watch a first team training session.

Proceeds will be split between Sean’s chosen charity, Kidney Research UK, and the Go Fund me website for The Scott Macnaughton Trust, set up to honour an old and much loved friend who died recently at the age of 44. The Trust will help both his mum and his young son, Daniel.